Astoria is the oldest city, west of the Mississippi. It is rich with history, culture and natural resources, such as salmon, sturgeon, Dungeness crab and abundant bottom fish species such as sea bass, ling cod and albacore tuna. Salmon fishing in Astoria is what made the region famous in the 1800’s, but when overfishing and loss of habitat due to the construction of a multitude of dams cut off wild salmon from their historic spawning and rearing grounds, populations of wild salmon plummeted in a river once credited for being the largest producer of Pacific salmon.

Intertital rocks in Tillamook Bay near Wheeler, Oregon on the Oregon Coast

Astoria sturgeon fishing is not only popular for the abundant sturgeon populations that gather here in the summer months, but for the size of these Astoria sturgeon. Although not the largest sturgeon that grace the Columbia, these monster sturgeon frequently attain lengths of 5 foot or better. Since much of the estuary is made up of shallow sand bars where sturgeon forage on shallow water freshwater clams and sand shrimp, we often fish for Astoria sturgeon in water less than 10 feet deep, using light gear and light line. Fighting an Astoria sturgeon on light gear is a memory you won’t soon forget.

Although I caught my largest Astoria sturgeon at approximately 11-foot in length, the largest Columbia River sturgeon often reside near Bonneville Dam, nearly 145 miles upriver from the mouth near Astoria. There used to be a targeted fishery for these “oversized” sturgeon beasts, but fishery managers have closed this reach of river so this spawning brood stock of sturgeon can utilize this spawning habitat unmolested during the spring months. None-the-less, 5 to 7 foot sturgeon are quite common in the lower Columbia River near Astoria, and when a sturgeon fishermen gets a hold of one or more of these over the course of a day, your friends won’t believe you without photographic proof. By the way, that 11-foot sturgeon took 1 hour and 20 minutes to land, and went through 3 different guys on my boat. 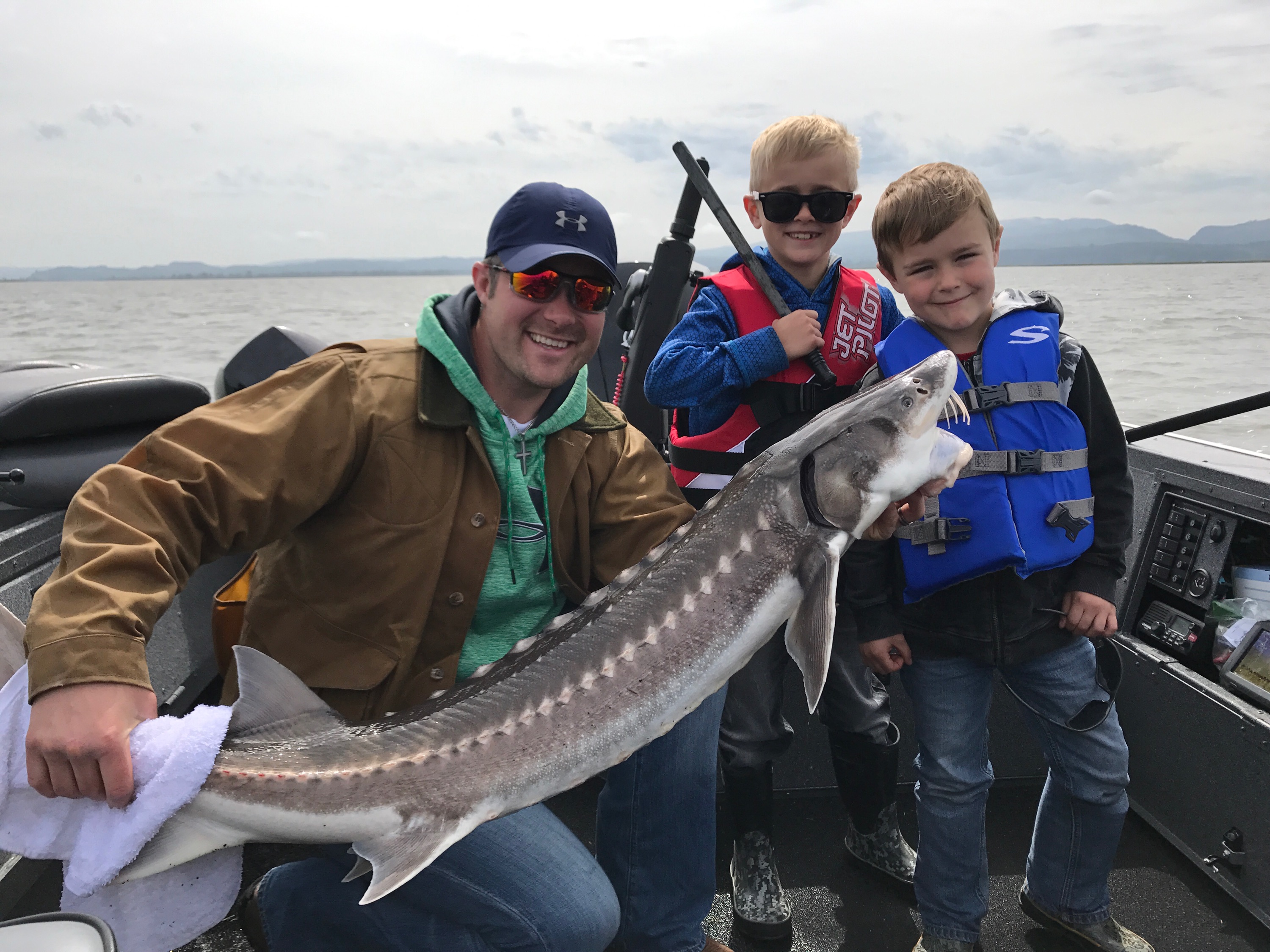 Astoria sturgeon are some of the finest eating fish Oregon has to offer. Historically discarded as bycatch by the commercial gillnet fleet as a nuisance species, commercial caught sturgeon now fetches a high price on the seafood market. Astoria sturgeon often sells for more than wild caught salmon these days. Their flesh is best described as a dense, white fleshed fish that is versatile for cooking. From deep-fried fish and chips, to grilled as kabobs, smoked and even boiled in sugar and salt water and billed as “poor man’s lobster,” taking home a 50″ sturgeon is a treat worth pursuing if you get the opportunity. Astoria sturgeon offer a mild flavored flesh that lasts extraordinarily long without having to be preserved. Unlike other species, an Astoria caught sturgeon will retain its fresh flavor and texture for 5 to 7 days after harvest if stored in a cold refrigerator or on ice. Astoria sturgeon in the keeper sized range have the highest quality flesh. 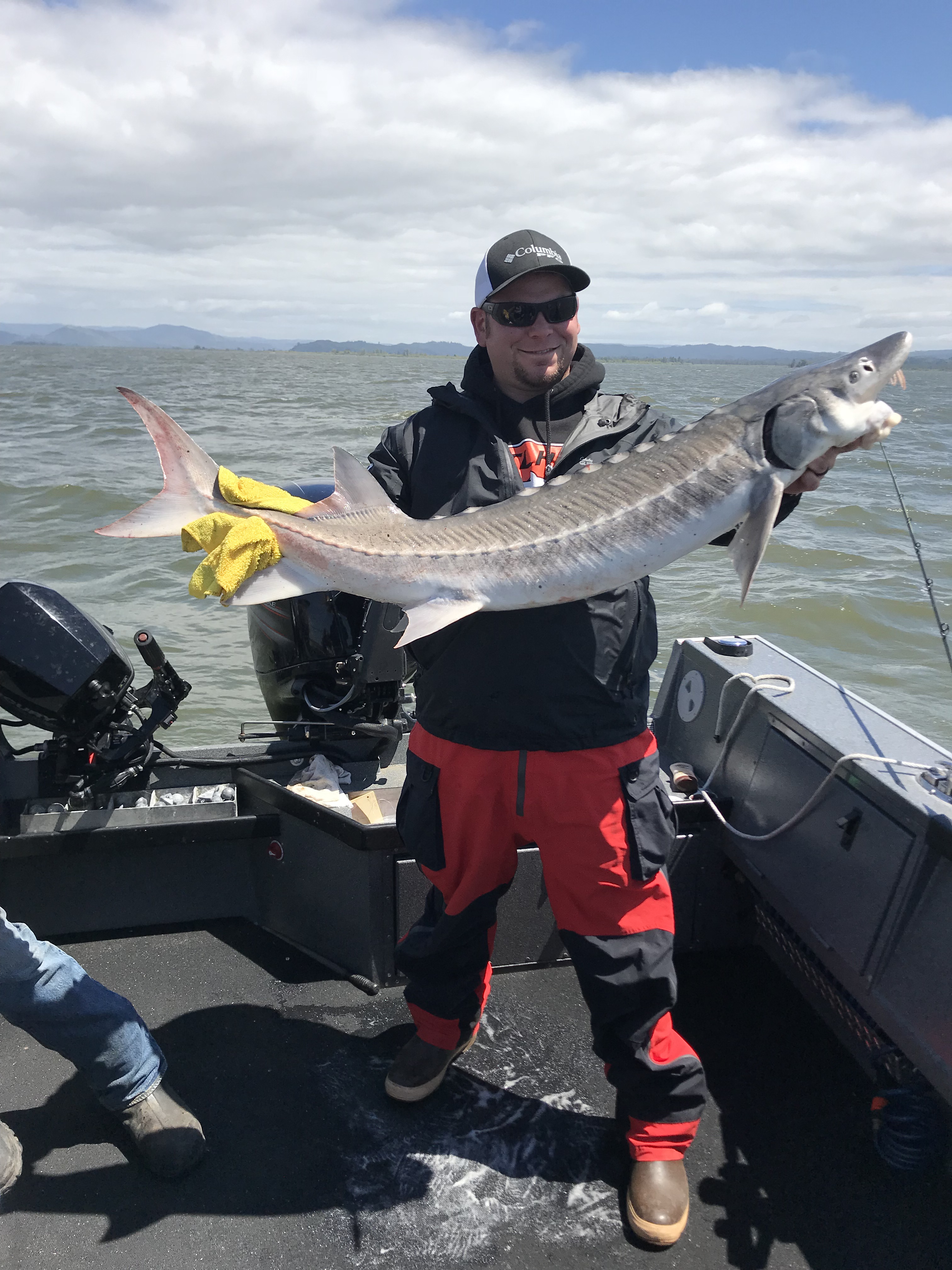 Because Astoria area sturgeon are so robust in size from a productive winter and spring feeding frenzy, many of the sturgeon we catch in the lower Columbia River estuary near Astoria often exceed 50, 60 or 70 pounds in weight. It’s not uncommon to even catch and Astoria area sturgeon over 100 pounds in weight. To have such a huge fish on the line, especially while using light gear to catch them, can prove an incredible challenge to most anglers. For that reason, Astoria fishing guides often deploy an anchor release system that enables the fishing guide or charter boat to “float out” with unmanageable Columbia River sturgeon so that anglers stand a better chance at landing one of these brutes. With reel peeling vigor, a 100 to 200 foot burst from a large sturgeon is fairly common. Your Columbia River fishing guide is well versed on how to land these large sturgeon so prepare yourself for the best 20 to 30 minute fight of your life!

Due to the robust size of Astoria area sturgeon, and the fact we often experience waters in the 55 to 60 degree range during the spring and summer months, these fish are labeled as best in their class in a pound for pound comparison versus any other species we have on the west coast. Chinook salmon is still king in Oregon, but once you’ve experienced a day of sturgeon fishing on the lower Columbia River near Astoria, you’ll be back for more.

Astoria area sturgeon that we hook in water shallower than 5 foot put up an unparalleled fight. We’ll often use bait that “matches the hatch,” as sturgeon are often in that shallow water in pursuit of sand shrimp or dead or dying anchovies. Using light gear and light lead, we set up anchor in a strategic location depending on the tide to intercept actively feeding sturgeon on the lower Columbia River. On incoming tide, we search out the channels that lead up to the expansive sand flats near Astoria. Columbia River sturgeon will use those travel lanes to work those shallow sand flats once they get covered with saltwater on the incoming tide. Those sand flats harbor abundant populations of shrimp, clams and worms that these sturgeon will feed on throughout the incoming tide. On outgoing tide, we’ll strategically place the boat just off of these shallow flats as Astoria area sturgeon spill off of the shallow mud flats and into deeper water for the outgoing tide. The edges of these massive sand flats are the perfect place to intercept these feeding fish before slack tide kills the bite. 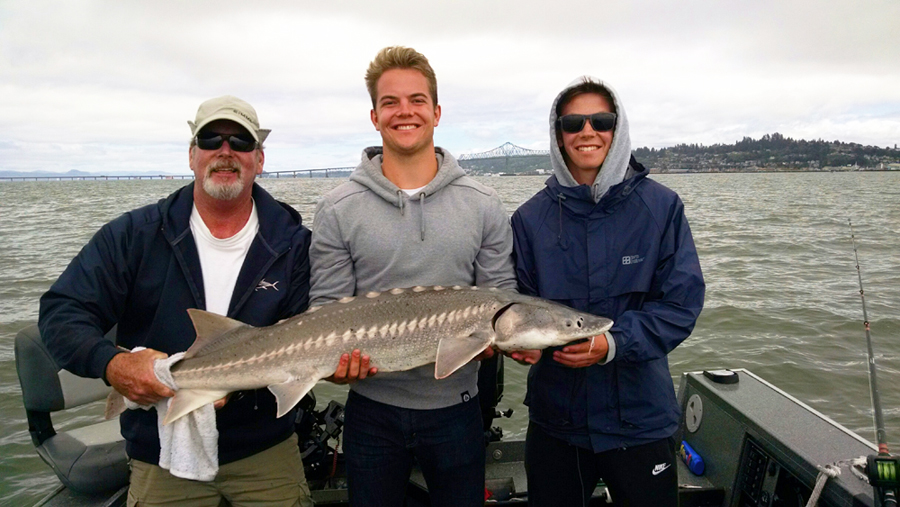 Sturgeon are a highly migratory species. Born in the Columbia River near Bonneville Dam, they rear as juveniles for the first decade of their life in or around fresh water, most often the lower 145 miles of the lower Columbia River. As juveniles, they have an incredible array of armor to protect them from most predators. The sharp barbs on the sides of Columbia River sturgeon are called scutes with upwards of 5 rows of them along their sides, backs and bottom to keep larger predators away. Furthermore, their skin is tougher than leather, making them near impenetrable to most species. Humans and the modification of their habitats have taken a toll on these species, but Columbia River sturgeon remain the most abundant sturgeon species on the planet due to careful management of these fish and strict harvest guidelines that keep us from over-harvesting. Still, stellar sea lions have chased spawning sturgeon from their historical spawning grounds so spawning success is dropping, but that may soon change.

After about a decade in freshwater, sturgeon begin to expand their horizons and venture out into the saltwater where more abundant food sources are available to them. Although they are principally bottom foraging fish, sturgeon have both the capability and tenacity to feed on live bait fish and other species such as 3 to 5 pound shad. There’s a reason they have far outlived the dinosaurs, they are a very adaptable species.

Once in the ocean, they can take advantage of abundant populations of crab, clams, shrimp, anchovies, herring and a multitude of other forage species. Here, they often grow 3 inches or more every year during periods of abundant food sources. During the winter months (January, February and March), they follow huge schools of Columbia River smelt into the lower Columbia, where Columbia River sturgeon voraciously feed on oil laden smelt to put on pounds during what is traditionally a lean time of year for most species. This is a cycle that repeats itself on a yearly basis, but given the Columbia River sturgeon’s adaptability, they have an array of life histories to take advantage of that has made them successful over the millennia.

Intertital rocks in Tillamook Bay near Wheeler, Oregon on the Oregon Coast

Columbia River sturgeon don’t reach the legal size range (currently 44 to 50 inches) until about 16 years old. Columbia River sturgeon don’t reach sexual maturity until about 6 foot in length, which is about 30 years in age. Once sturgeon exceed 50 inches, sturgeon biologists believe that they will contribute to the future of their species if not preyed upon by the numerous stellar sea lions that they have to negotiate to make it to their spawning grounds.

A new law was signed in December of 2018 that now allows for the lethal removal of sea lions, both the stellar sea lions that pillage spawning Columbia River sturgeon, and California sea lions that have brought wild winter steelhead and spring Chinook closer to extinction. This law should have a dramatic impact on the recovery of these species, and help bring back both the long-lived sturgeon and failing Columbia River salmon and steelhead stocks back from depressed levels.

In conclusion, lower Columbia River sturgeon fishing near Astoria, Oregon offers world class fishing without the world class attention. Depending on offshore weather conditions, sturgeon fishing guests may be able to combo up your fishing experience with other salmon fishing opportunities also taking place in the Astoria area or on the lower Columbia River. Steelhead can also be found during select times of the year here too. Just ask your Astoria area fishing guide or charter boat captain what’s available at what time of the year.